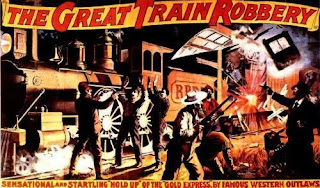 The Great Train Robbery, directed by Edwin S. Porter for the Edison Manufacturing Company in 1903, established film as an attractive and lucrative form of entertainment in the United States. The Great Train Robbery toured the country for several years as well as being the premier attraction at the opening of the first nickelodeon in 1905.

It is also considered to be film’s first major Western and is our earliest example of a film being loosely based on historical events. The film’s plot derives from Butch Cassidy’s gang robbing a train heading towards Wyoming for $5,000 in cash; interestingly, the film itself was actually shot in New Jersey. Such stories were already hugely popular with American audiences and were found in dime novels and stage melodramas. 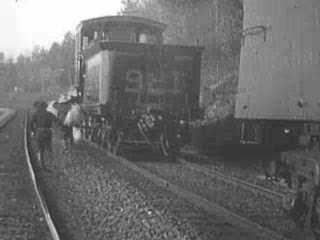 The Great Train Robbery’s technical and historic importance outweighs its artistic merits. It is a film which made several groundbreaking innovations (such as crosscutting), but I would argue that certain aspects of its historical importance have been overstated. For example, it has been suggested that The Great Train Robbery is the first narrative film. Our chronological approach to viewing film history debunks this myth, as Méliès’ 1902 film Le Voyage dans la Lune is quite clearly a sustained narrative.
The Great Train Robbery is Michael Bay’s wet dream: an extended action set-piece that spans the entirety of the film with a few brief respites. The first few minutes do generate an element of suspense and intrigue, but this is soon lost in a scene which involves the robbing of the passengers. The scene is overlong and drawn out, suggesting that Mr. Porter was not the greatest of editors.
It is important to observe that the American understanding of what the duties of a director entailed differed drastically to what a filmmaker like Méliès understood of the same term. The excellent ‘The Oxford History of World Cinema’ draws out the contrast:
Despite his nominal position, Porter only controlled the technical aspects of filming and editing while other Edison employees with theatrical experience took charge of directing the actors and the mise-en-scene... George Méliès, who also owned his company, did everything short of actually crank the camera, writing the script, designing sets and costumes, devising trick effects and often acting.
This brings us to one of Film: Ab Initio’s key issues: collaborative effort vs. auteur’s vision. At this early point in film history, I would argue that the latter is more successful. But this discussion will become more complex as the years roll on.
The brutality of the violence on display in The Great Train Robbery may be unapparent to the modern viewer, but surely scenes such as where one of the passengers tries to escape and was shot down by one of the robbers would have had quite an effect on the contemporary viewer. 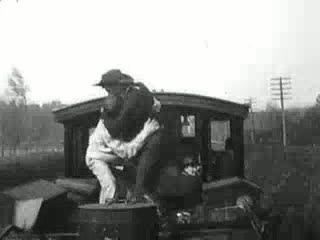 It must be noted that there are certain set-pieces that the viewer cannot help but admire. For example, the brief fight that takes place on top of the train is a well-shot (see above) and greatly increases the atmospheric tension of the film, as is the picturesque scene where the robbers mount their horses (see below), a scene that will be replicated ad infinitum in almost every Western that follows. 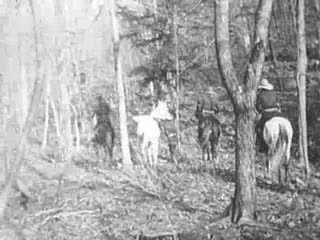 Much has been made of the film’s final shot, which involves the actor George Barnes firing his gun (see below) at the audience, the shot was even replicated at the end of Goodfellas. This would undoubtedly have had quite an effect on the contemporary audience, but I would yet again suggest that its importance and effectiveness have been overstated. 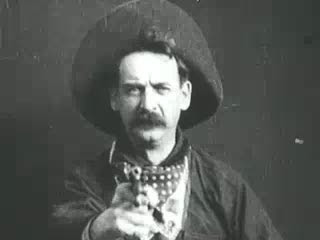 A comparison of this shot with The Lumiere Brothers’ Arrivee d'un train en gare a La Ciotat will illustrate this point. Both ‘scenes’ provoked a similar level of fear in their respective audiences. Yet from a filmmaker’s perspective, the latter work is far more impressive. As discussed in the Lumiere’s blog, the Lumiere Brothers’ choice of composition greatly increased the sense of awe at the train’s eventual arrival. The final shot of the The Great Train Robbery on the other hand, simply involves the actor firing a gun straight at the camera.
The Great Train Robbery’s importance on this list will become retroactively apparent as we observe the influence it has had on future Westerns. For now though, this blog reasserts that its importance may have been overemphasised.
Fritz Lang at 11:15
Share